Q3 Perspective: The Upcoming Election, The Markets and InSight Performance

We hope your summer is going well and that you are surviving the heat wave. There have been a few questions that we have been receiving quite often lately, so we decided to dedicate this quarter’s e-mail update to address them for everyone.

QUESTION 1: Should I be scared about what is going to happen to the markets because of the election? What if my candidate doesn’t win? They are saying the other candidate is going to ruin the world!

This is (by far) the most common concern that we are hearing. It isn’t surprising given that we are only a few months from November. Elections (this one in particular) provide plenty of fodder for the TV’s talking heads, internet bloggers and newspaper reporters. Even money managers and “financial gurus” are adding their two cents. Add to this all of the rhetoric from the campaigns themselves, and you have the potential for a whole lot of hyper-sensationalized predictions and projected outcomes swirling around out there.

As we discussed in an email earlier this year, human nature has a tendency toward pessimism. (Why does pessimism sound so smart?) If we couple this together with investors’ desire to try to predict the future, along with the media and campaign rhetoric discussed above, a perfect storm of investor anxiety can set in – if we allow it.

We all know that history is not a precise indicator of the future, however, it can certainly offer some perspective from which to view current events. Election time usually causes uncertainty for the markets. Understandably, many studies have attempted to draw connections between election years and market returns. General findings include that if the same party remains in office, the market tends to react favorably. Interestingly, stocks have done better when there was a Democratic president, even though Republicans are known to be more pro-business. Research also shows that if the market is up in the three months preceding an election, the incumbent party has an 86.4% chance of re-election (reference). So perhaps we should be asking the question: “How do the markets impact the election results?” – instead of the other way around.

Research largely indicates that elections should not be used to predict the markets. Trevir Nath, of Nasdaq.com says: “Regardless of how remarkable the correlation between election cycles and the stock market sounds, it should not dictate your investment decisions. The patterns in the relationship are often viewed as spurious with no direct causal connection. Instead your behaviors should follow the basic fundamentals of investing such as understanding risk, diversification and market timing.” (reference). We believe that Mr. Nath offers good, sound (albeit not exciting or politically motivating) advice.

Regardless of who is elected, our government thankfully has many checks and balances that stabilize and hold it together. The Federal Reserve chairman has significant impact on the markets and acts independently from the White House and Congress. The Senate sets the pace on taxes, laws affecting business, and other issues of interest to investors.

QUESTION 2: What is going on with my InSight account? It has done better than I thought with all of the negative news and ups and downs this year.

It has been a roller coaster year. January and February saw a significant drop in the markets, and earlier this summer, the Brexit situation caused more disruption. While international stocks continue to lag, US stocks remain positive year to date, along with emerging markets, which appear to be in a recovery stage. Bonds have also seen a steady increase, and real estate is leading the way with double digit gains.

LifeGuide’s InSight Investment Principles #2 and #3 continue to serve us well in 2016. Maintaining meaningful diversity and being contrarian provide the foundation for our dynamic rebalancing strategy and unconventional allocation to real estate. Our weekly monitoring for rebalancing opportunities has enabled us to take advantage of some opportunistic buying. The combination of these principles and strategies has helped drive performance.

QUESTION 3: The stock market is so high isn’t it going to crash soon?

There seems to be this feeling that since stock prices are at all-time highs, they cannot go any higher and have to come down. This feeling coupled with the seemingly increased level of global turmoil have been on the minds of many folks. The reality is that there is no ceiling on market prices. The concept of economic growth and history would strongly suggest that even if we experience a market correction in the near term, markets should continue to advance over the long term.

Another common theme that we have been hearing is: “Things are different this time. These events are unprecedented. We have never seen an economic environment like we are seeing now.” It sure does feel like that when you turn on the news and listen to the candidates. The chart below can help bring us some perspective. It is a chart of the Dow Jones Industrial Average overlaid by some of the major challenges that have occurred throughout the 20th century. If we put ourselves in the shoes of those living through the headlines listed below, it is easy to see how they may have thought: “We have never seen anything like this before. It is different this time.” Yet the Dow continued 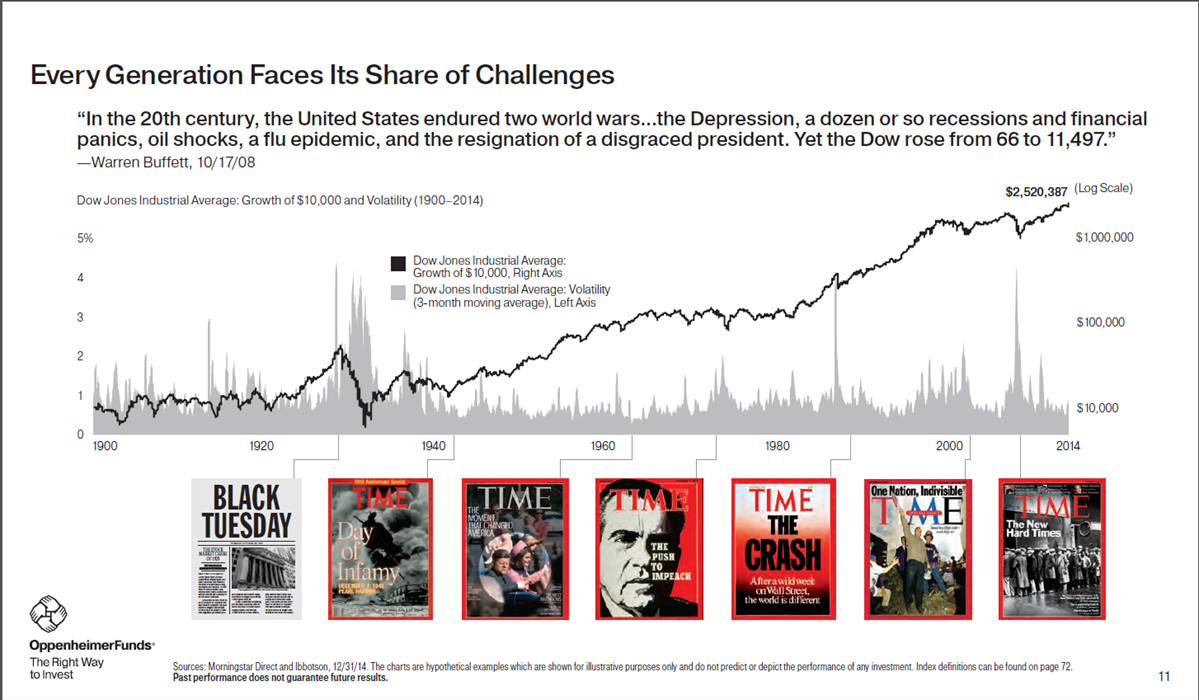 to march on over the long-term. Ok, but what if there is a correction coming soon? Two observations about the chart that we would like to call to your attention are: 1) notice the long term upward trend of the Dow throughout time and through all of the world’s major events, and 2) notice the volatility (sometimes extreme) over short time periods. So, what do we do with these two observations? As you have hopefully experienced through your interactions with us, we don’t believe in ignoring what’s happening in the domestic and global environments (i.e., putting our head in the sand), nor do we believe in attempting to forecast short term trends or event outcomes. We do believe in careful planning and principle-based investment management. We plan for a range of various potential outcomes. Said another way, we will not attempt to guess if Scenario #1 is going to happen, OR if Scenario #2 is going to unfold. We will consider and plan as if BOTH scenarios could happen. Tangible evidence of this in our practice is our retirement risk analysis, asset bucketing strategy and our dynamic rebalancing methodology. Don’t hesitate to ask about these at your next review meeting.

There are additional (and more technical) reasons that the market is able (and yes expected) to continue to push through new highs over time. For those of you that are interested, we have included further discussion below.

OK, so you want to know more. Great! Let’s take it a step further and look at Price to Earnings ratios (P/E), which is a popular way to measure stocks relative to each other and to different time periods. Absolute P/E ratios are high from a historical perspective. This has gained much attention since the conventional wisdom says not to buy at high P/E ratios. However, it is inaccurate to compare P/E ratios from different time periods. Richard Bernstein points out: “P/E ratios in isolation have not historically been good forecasters of future returns, because P/E ratios must be related to interest rates and inflation.” (reference). A better way to relate P/E ratios is to normalize them by graphing them against inflation. Below is a great graph from Bernstien showing this. P/E ratios that fall near the redline can be considered average or “normal” from a historical standpoint. Low interest rates, low inflation, and high earnings justify current P/E ratios. 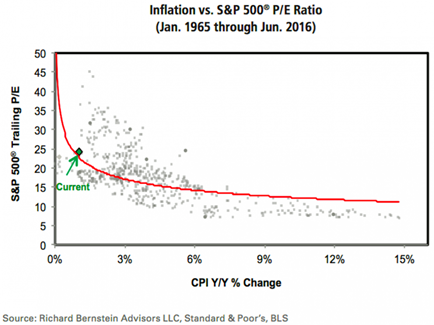 “Equity risk premium” or how much you need to make for taking on the risk of stocks, is another way to determine if the market is overpriced. See what we have previously written on this topic here. Comparing the current equity risk premium to historical norms can indicate if stocks are over- or underpriced. This is a great article on the topic which includes the snazzy chart below. At the risk of putting everyone to sleep, I’ll summarize by saying the higher the dot on the chart, the better. Seeing that the 12/31/15 dot is historically pretty high, gives continued reason for optimism.

Thanks for taking the time to dive into this with us. Hopefully this discussion has been helpful to understand some of the underpinnings of market behaviors. If you have further questions, don’t hesitate to ask.

You have important questions, and we want to get you answers. We offer everyone a complimentary, no-strings-attached Exploration Meeting where we get to know each other, understand what you’re looking for, and answer all of the questions you have. In preparation for our conversation, we ask everyone to first complete a short five-minute, online Intro Questionnaire.

Once we receive your submission, we’ll reach out to schedule your complimentary Exploration Meeting. Type in your name, email, and preferred phone number below to get started!

Learn more about how we work together

The topic of long-term healthcare can be complex, time consuming, and, quite frankly, not a lot of fun. We’re here to help.

We are Dave Ramsey ELPs for long-term care, as well as SmartVestor Pros. We offer all of Dave’s fans a complimentary, no-strings-attached LTC Exploration Meeting where we will take the time to know you, answer your questions about LTC, and provide quotes and recommendations tailored specifically for you.

To prepare quotes for you, we ask that you complete a short three-minute online LTC Questionnaire.

One we receive your questionnaire, we will shop your case to multiple insurance companies, prepare quotes, and reach out to schedule your LTC Exploration Meeting. Type in your name, email, and preferred phone number below to get started!

Looking for a SmartVestor?

You’ve come to the right place! Our Managing Partner, Doug Denlinger, is a SmartVestor Pro as well as a Dave Ramsey Endorsed Local Provider (ELP) for long-term care insurance.

Like Dave, we believe that financial peace is a critical component to leading your most impactful, fulfilled life—the life you are called to live. And we want to help you get there. Which is why we offer all Dave Ramsey fans a complimentary, no-strings-attached Exploration Meeting where we answer your questions and get to know each other.

In preparation for our conversation, we ask everyone to first complete a short five-minute, online Intro Questionnaire. Once we receive your submission, we’ll reach out to schedule your complimentary Exploration Meeting. Type in your name, email, and preferred phone number below to get started!